Hi,
Its amazing how life can go from one extreme to the next in seconds.
Well I've spent quite a lot of time over the last 2 weeks
in and out of Hospital supporting my Other Half.

He phone me just before the beginning of last weekend
to inform me that he was in hospital after a accident at work.
It doesn't seem much but he had sliced straight through his hand.
And cut his muscles and we also thought his tendons as well.
He's now had his Operation and is home feeling rather sorry for himself,
and I'm having to look after him,
(doing all the little things you do with out thinking).
All I can say is good job it wasn't his dominant hand
or he would have been totally helpless

The Theme at
Glitter n Sparkle is:-
Anything Goes

Our Sponsors this week are:-
Arti Doodles who are offering
4 Images from their store

Morgan's ArtWorld who are offering
3 Images from their store

Polka Doodles who are offering
a $15 Gift Certificate

My Project this
week is:-
Noel Christmas Mouse Digi Stamp
from Polka Doodles
(One of our sponsors) 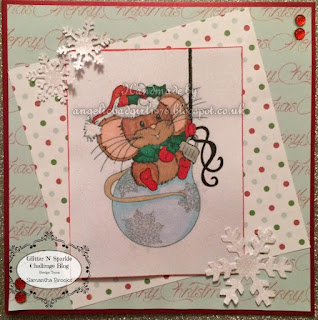 To begin with I used 8x8 Square White Base Card
(stash)
Which I fully covered with a Pearlised Deep Red Card
(Ross Papers)
Next I covered that with a slightly Smaller Square of
Blue/Red Christmas Writing Backing Paper.
I then cut an even smaller square of
Polkadot Backing Paper and set it on an slant
(the Backing papers are Christmas ones I was given) 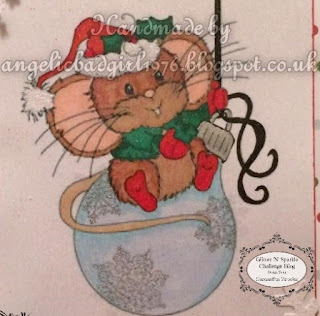 Next I used the 'Let It Snow' Stamp Set
(Simply Cards and Papercraft)
and using the Watermark Ink
(Versamark)
and Silver Tinsel Embossing Powder
(WOW)
I added the snowflakes to the Blue Bauble.
I also added some Crystal Glamour Dust
(Deco Art)
to the Rim and the Bobble on the Santa Hat.

I then cut the Image out in a Rectangle
and went around the edge of it
using my Berry Red Promarker Pen.
I also added a sheen to the Image rectangle by
lightly spraying on some
Pearl Diamond Spray and Sparkle
(Crafter's Companion)
I then set it straight on the Card
and raised it up a little with Foam Pads.

I then Die-cut out 3 Snowflakes
(I'm not sure who's they are as I've lost my little piece of info paper out of my Die holder)
2 Small and 1 Large.
I then covered them all in Crystal Glamour Dust
and added then around the Image.

Finally I added some 6mm Red Dotted Rhinestones
(stash)
to the Card.
Posted by Unknown at 09:00 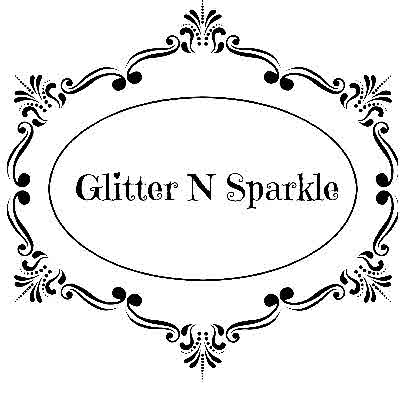 I would like to promote my lovely Sister-In-Law's new book with you all. How to make yourself a lean, mean decision-making machine! 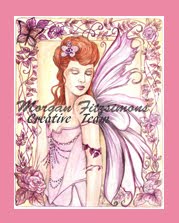 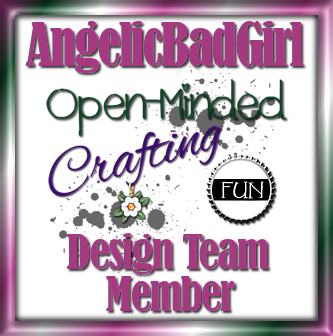